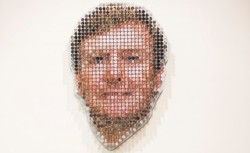 In early 2016, the municipality of Horst aan de Maas called on artists to submit an original design for an official portrait of King Willem-Alexander. The winner of the contest, Teun Verbeek, was given the opportunity to bring his idea to life: a portrait of the King, composed of selfies taken by residents of Horst aan de Maas. Verbeek contacted Vullings Metaalbewerking to assist with the realisation of the ‘selfie portrait’.

“We worked together with Verbeek to explore the best options for realising his idea”, explains John Hermans from Vullings Metaalbewerking. “The initial idea was to construct the portrait on a steel base, covered with threaded rods encased in a steel bushing. A round plate would then be welded to the bushing and then the entire structure would be lacquered. Our experts soon came to the conclusion, however, that the design was rather unwieldy and the portrait would become extremely heavy, because of the materials used. The welding makes it difficult to ensure that the round plates are all flat against the bushings”, explains Hermans. The portrait was eventually produced entirely from aluminium, on the recommendation of Vullings. The portrait no longer incorporates threaded rods, but features twisted aluminium ‘photo holders’, meaning welding was no longer required. “The whole portrait was anodised to create a more natural and permanent look”, reports Hermans.

Thanks to the advice of Vullings Metaalbewerking, the selfie portrait was not only technically more feasible than Verbeek’s initial idea from a production perspective, but was also more interesting from a financial perspective. Equally importantly, Teun Verbeek, Vullings Metaalbewerking and the municipality of Horst aan de Maas were all happy with the end result, which currently hangs in the municipal hall!